The leagues are open to anyone from any club in the Riccall and surrounding area. All players will be put into competitive leagues respective of their playing abilities. If you are playing doubles, you can request a partner (as long as they have also joined the league). Your partner does not have to be from Riccall Tennis Club. Your aim will be to try and play against everyone in your league. All singles and doubles matches consist of 13 games.

A points system will be used to rank players in each league based on their match results. This will be tracked on your scorecard and updated daily on the Tennis Events website. Here you will also find player statistics for every competitor, individual match schedules and match results.

The top 2 players or doubles pairs with the highest number of points will be invited to a Finals Day to compete against each other as well as other winners from the other leagues for bonus prizes. The top 2 highest scorers (the players who won and played the most matches) will achieve promotion and be invited to compete in the higher league in the next 10 week league season. The bottom 2 players will be relegated down into the league below.

Once you have signed up, you will be added into your League’s WhatsApp group. Here you will meet all other players in your league and view information about any game play sessions coming up / events and league updates. You will have access to everyone’s contact details in your league. The matches are arranged by you whenever you are free. There will be set matchplay times where the courts will be free for sole use for league matches, however if you cannot make those times, you can arrange your matches with your competitors when it suits you. Apart from when coaching sessions are taking place, the courts are free during the week and the weekend. The juniors will have set matchplay times to get their games done.

Please make a note of any clean, untouched aces as there is a side line competition running across all leagues for the competitor who can get the most aces!

If you would like to enter the league, please complete our online registration form or contact Sasha Taylor directly.

Book onto all 4 singles leagues for just £130. Book onto the Singles and Doubles league for just £50.

How to complete your scorecard

Below is an example of the Tennis Events league scorecard which all players who enter will receive as either a doubles team or singles player.

To begin enter your name, or your team name, at the top of the scorecard. Your results will appear on the website alongside this name. Next, highlight your league (doubles or singles) by either circling or crossing out the options. You should select your league level as either Advanced / improver or Beginner

For every match you play, enter the date on which the match took place, then enter the scores in the two centre boxes. Enter the number of games you won in the first box, and the games won by your opponent in the second box. Ask your opponent to print their name and sign the card as proof that they accept the results. You will also need to sign the card after every match.

Take a photo of your results and either email it to results@tennisevents.net or post it in your league’s What’sApp group. 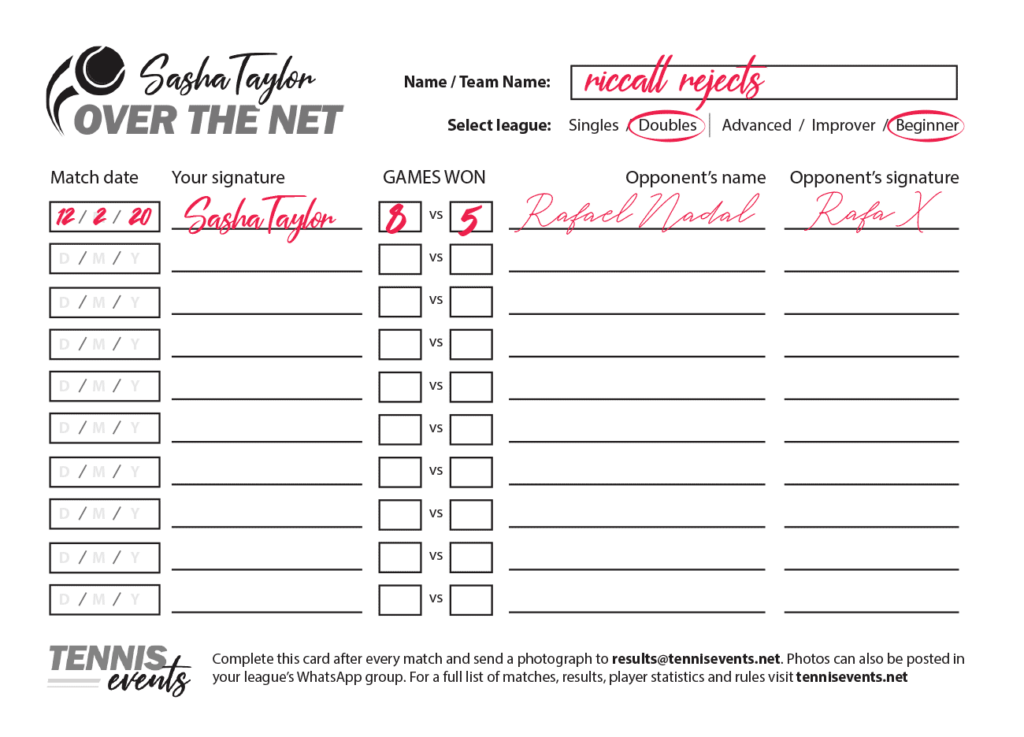